You are here: Home / Ideas / Top tips to keep your laundry under control 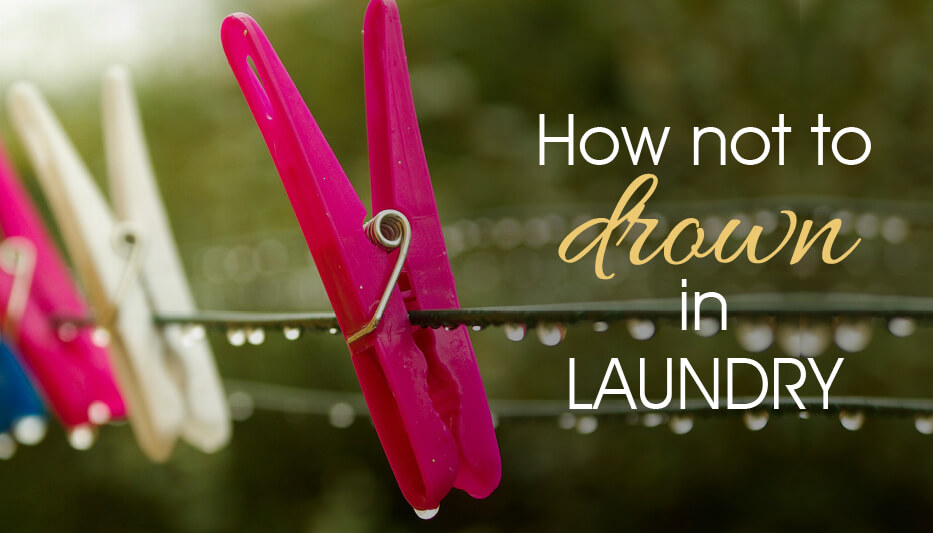 When I recently asked on Facebook what household job got most easily out of control, laundry was top of the list. Unlike many other household tasks, washing builds up whether you are home or not. Even if you are out of the house for 18 hours of every day, you still wear clothes… and need to wash them!

In our house I am super lucky to have a husband who doesn’t mind doing the washing. He often puts on a load as he leaves for work in the morning and I’ll then hang it out during the day. This simple system works so well and really helps to keep our washing organised. It got me thinking about what other laundry systems we have in place to help keep the washing under control.

Here are my top tips…

Do a load a day 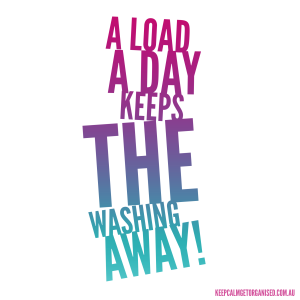 The idea of doing a load of washing EVERY day is probably not super exciting to most people, but it is almost essential.

You might be able to get away with every second day if you’ve got a big washing machine, or if it’s just one or two of you in the household, but if you’ve got kids (especially small messy ones!) then you really will need to do a load each day.

We don’t have a dedicated laundry (our washing machine and dryer live in a small cupboard) and we’ve got a medium-sized (7kg) washing machine, so generally we do a load per day.

Washing daily means the washing doesn’t build up and you are less likely to have it get out of control if the weather turns for a few days (or a week or more if you’re in Sydney at the moment)!

Create a system for washing so it becomes a habit each day. If you do it first thing then it is done and out of the way. Put a load on first thing in the morning and then hang it our during the day or when you come home in the evening.

Our clothes line is undercover so leaving it out overnight isn’t a problem (except in winter where there is dew in the morning). If you can’t leave your washing out at night then you could reverse the system. Set a timer on your washing machine so it finishes first thing in the morning and then hang out before work or leaving the house.

Set up a laundry hamper in the bathroom rather than just the laundry. Clothes are most often taken off in the bathroom so your chances of getting them into the basket and not the floor increase!

Separate darks and lights (& delicates or baby clothes if you wash them separately). Also put a small bucket or another basket next to the main hamper that is for clothes that need treating for stains. 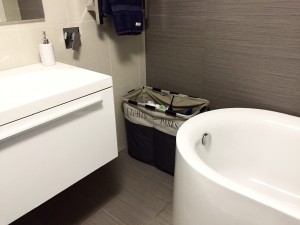 This is our laundry hamper for sorting lights and darks. It lives in the bathroom and I chose neutral colours so it would blend in.

As I mentioned above, set aside things with stains from the general clothes so you can deal with them as they go into the wash. There is nothing worse than doing a load of washing, hanging it and then discovering as you go to put it away that it has a stain which needs to be treated.

Fold from the line 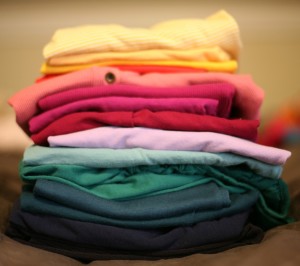 This is such an easy thing to do and it really doesn’t take much longer. Don’t just pile it all into a basket, fold it as you go. This reduces the need for ironing and saves time. If that isn’t motivation enough I don’t know what is!

Sort into baskets for who’s washing it is

Just like folding from the line, divide it into owners directly as you take it off the line. You could use different baskets or just separate it within the one basket. If everything is already separated it is much easier to put it straight away.

I have to admit that this is my sticking point. I’m ok and getting it washed, on the line and folded into piles of who owns what but those baskets then often sit in the bedrooms waiting to be put away.

Try to follow through with each load. Once folded from the line, put it straight away. Don’t let it build up, keep the momentum going.

Get the kids involved

Kids can help with washing from a very young age. Most toddlers can be trained to put their clothes in a hamper with a little prompting. Preschoolers can help sort, pair socks, hang out, collect pegs or even fold.

Put hooks up for the “not dirty, not clean” stuff 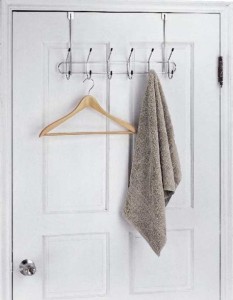 You’ll always have pieces of clothing that are not clean so can’t be put back in a cupboard but are still good to wear again.

We have over door hooks for hanging up jumpers, jeans and other things that can be worn again. This also helps battle against the floordrobe and discourages people from throwing clothes into the washing basket unnecessarily.

These are also great for the back of the bathroom door.

Do you have piles of random lonely socks? If they end up back in the sock drawer then chances are they will never find a mate. Create a lost socks rack or board to help match them up. Put it up in the laundry or near the washing line.

I love these ones…