You are here: Home / Blogging / Secrets of organised people 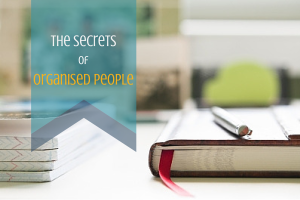 Why does staying organised seem to come so easily for some yet is an uphill battle for most of us? Here I’ve got a few secrets of organised people. Try implementing them in your life, I’m certain they will help!

How many times have you noted something important in your head, only to forget it 2 hours later? Organsied people don’t just rely on memory. They write stuff down, they set reminders in their phone, they keep a notebook by the bed. Reduce the mental load and get more organised simply by getting things out of your head and onto paper (or screen).

Organised people… Are consistent & have routines

Generally organised people are consistent and have routines. They have a system for things that happen daily, they put the mail away, they sort the washing, they have order. Organisation is a lot about habits and habits are all about consistency. What areas of your home could benefit from some routine and consistency?

This is a lot about routines and consistency but with time, organised people just work on autopilot. They do things the same way so they know what is coming. Order gives stability and helps you stay organised. This doesn’t mean you become boring and stuck in your ways, it just means you use a consistent, reliable and repeatable process when you are working through the everyday tasks that need to get done.

What areas do you think would help you to become more organised? For me it is turning it to autopilot and being consistent.