You are here: Home / Budgeting / How much do you spend on Christmas? 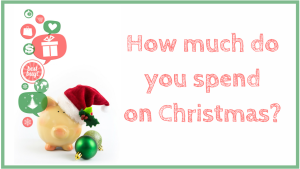 Brought to you by Fair Go Finance.

Many of you may remember a heated debate that erupted a few weeks ago on the An Organised Life Facebook page. I asked what I thought was a fairly standard question around this time of year… How much do you spend on Christmas gifts for the kids? Well, boy was I wrong about that being a safe topic of conversation! Answers flowed from people with a whole range of spending styles (as I’d expected). What I didn’t expect was the reaction others had to some of these comments. People certainly were opinionated (and some were just plain rude). In the end I had to delete a whole heap of the comments and move the conversation on. One thing was clear though, it was a topic many felt strongly about. I found it very interesting reading through what others spent and there certainly was a lot of variety.

Fair Go Finance recently conducted a study of close to 4000 Australian’s and asked them for details on how much they spend at Christmas. I was very surprised to read that while 90% set a Christmas budget, nearly half expected to blow it and more than 35% expected to blow it by more than $500! How’s that for planning to fail right from the start. So what accounted for these blow outs? The biggest culprits were a lack of planning (28%) and last-minute purchases (36%).

Based on the responses from people on my Facebook post, many seemed to be planning to spend well over $1000 on gifts alone, but it appears they are in the minority as total Christmas spending (including gifts, food and travel) in the Fair Go Finance study was under $1000 for over half of respondents. Only 20% planned to spend more than $1500 with 7% of those planning to splash out over $2000 on Christmas. Most people planned to dip into savings to cover these expenses but my guess would be that many will still end up piling it onto the credit card.

With less than 20 shopping days left to Christmas, here are some ideas on how to keep your spending under control.

What other ideas do you have for saving at Christmas? Do you set a budget and stick to it?