You are here: Home / In the home / How to organise a small linen cupboard

For the first time ever, I’ve finally got a linen cupboard!

Previously our linen lived in the tops of wardrobes and buried in blanket boxes, but thanks to a recent mini renovation we’ve been able to make space for a small cupboard behind our front door.

It’s an open shelf unit without any doors, so I’ve been thinking through ways to organise the linen cupboard so that will look neat and still be functional. It’s not a big space (60cm wide) so I also needed to do some decluttering and only keep what we really needed. 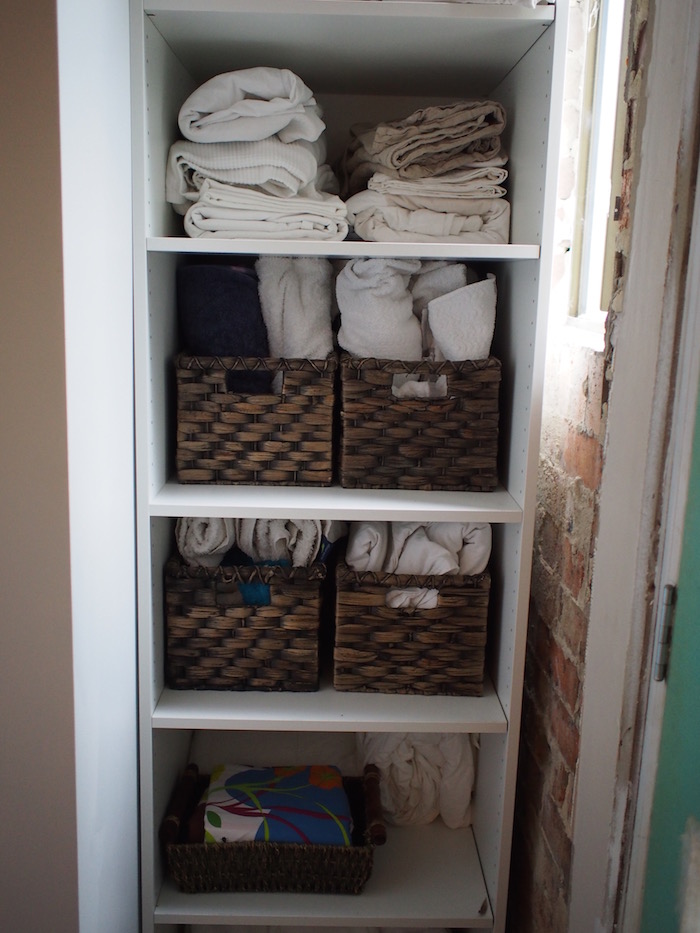 How much linen does a family of 4 need?

I find that linen is one of those things that just builds up over time, and before you know it you’ve got enough sheets and doonas to house half the neighbourhood.

So how much linen does a family of four actually need?

To some extent it probably depends on space. If you’ve got heaps of room then having extra linen isn’t really an issue. Given we are pretty tight on space, I’ve settled on the following collection of linen which is so far working well for our family:

If you’re short on space (like me) then making the most of storage is essential. This is how I organised my small linen cupboard so that everything was easily accessible.

After I decluttered my linen collection and was left only the linen we really needed, it was time to work out a plan for organising my small cupboard in a way that would still look nice given it doesn’t have any doors!

I started by measuring each of the shelves and working out the highest things I’d need to fit in. I then adjusted shelves to make the most of the space. I also found some little baskets that fitted easily to stack things in and keep them separated.

Work out what you use most

Choosing how to store things is the most essential part of organising a small wardrobe. Make sure that the things you use more regularly are easily accessed without having to pull other things out.

As soon as you stack things on top of each other you’re destined for a mess once you start pulling things out, even more so if they kids decide to give it a try!

Try rolling towels and positioning them vertically, I also used baskets to do this.

Baskets are your friend

If you’ve got an open cupboard (or a particularly deep one) then baskets are a great way to segment things and still keep them neat and attractive.

I used small baskets for different items so they wouldn’t all get mixed up and to give the cupboard a nicer appearance. You could use basic plastic tubs as well but as I don’t have a door I went for more attractive wicker baskets. Mine don’t match perfectly because I used spare ones I already had, but I kind of like the look that way anyway. 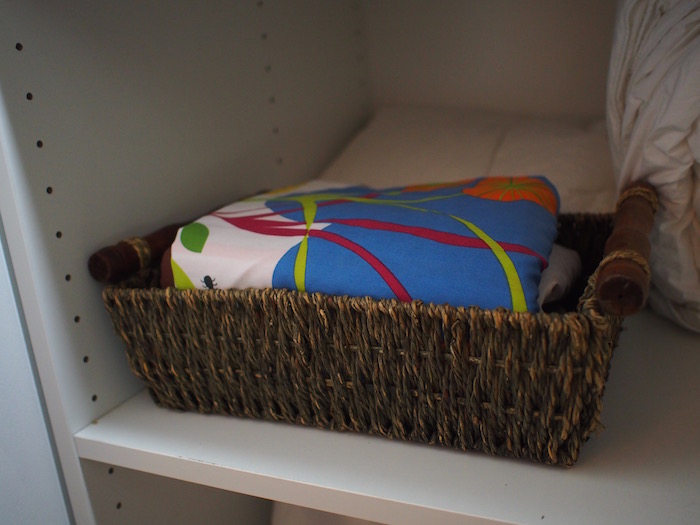 So there you go, our new linen cupboard! I’m just a little bit excited 🙂 It turns out organising a small linen cupboard so it is functional and attractive IS possible. Now just to keep it that way!

Do you have a linen cupboard? Is it organised or chaos?