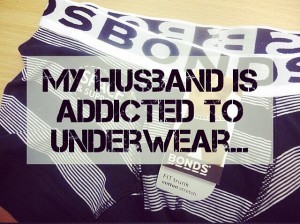 *Names have been changed to protect the guilty

Some husbands spend money on gadgets. Some blow it on booze. Mine? My husband buys underwear.

“How sweet” I hear you say. Buying nice things for his lovely wife.

But no, no such luck for me. My husband isn’t out buying beautiful bras & lacy undies. No he is buying boxers & briefs and all things manly. My husband has an underwear addiction!

We almost need a separate budget just for underwear. It’s not so much the individual price of each pair, it’s the sheer quantity!

In his own words, underwear needs to be replaced every 6 months at the very least.

Tell that to my 6 year old bonds bikinis!

“The elastic goes bad” he says.
“They get uncomfy” he says.
“I need more” he says (while we are browsing the myer underwear section for the second time this month).

He justifies his addiction by the fact he needs two pairs a day (pre & post exercise).
I’m not convinced.

He has all things underwear down to a fine art. There are good undies, work undies, soccer undies, running undies, undies on the way out, favorite undies and back up undies. Oh, and in addition to the underwear buying addiction we also have the underwear washing obsession. Underwear must never be put in the dryer. It must hang on the line in a special way. It really is quite an involved process. This all makes my husband sound a little on the obsessive side, which in general he isn’t. It’s just the undies… Oh, and the washing up. But that’s another post!

What random stuff does your husband spend money on?