You are here: Home / Travel / 10 things I learnt (the hard way) on our first family camping trip

This post was written in collaboration of Ford as part of the Ford Thinking Challenge.

A few weeks ago we loaded up the car (well two cars in fact, but more on that later) and headed up the coast for our very first family camping trip.

I have actually done my fair share of camping, both with my own family when younger, and with my hubby pre kids. We have always camped pretty off grid, no power, no water, no toilets… you get the idea. After two fairly disastrous Easter camping trips many years ago, I had sworn off camping. We even decluttered all relevant camping gear as part of the decluttering challenge earlier in the year!

Given our camping history, I’ll admit that it wasn’t exactly my idea of the ideal weekend away, but as we were on a bit of a budget and the other families we were heading away with were keen to camp, camping it was. 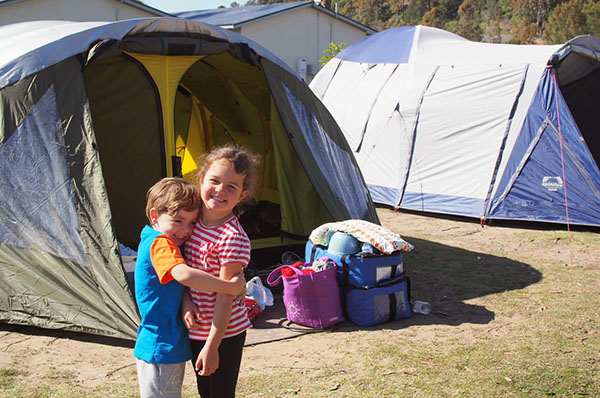 In the past I would have openly admitted that our camping style was somewhat hindered by my “princess” tendencies. It turns out my habits have rubbed off on my husband (or he’s just getting old), because when I told him we were going camping, he groaned and told me he was he was bringing a separate car so that he could pack MATRESSES.

I nearly fell off my chair!

So, off we set, two kids, two cars and four mattresses (and a WAY undersized family tent, I should have checked out reviews on camping blogs beforehand!)

We headed for a Big 4 camp site about an hour and a half from home. Somewhat more on the “glamping” than the camping side of things, with hot showers (that you didn’t need coins for), feature tiles in the bathroom (I mean seriously, what kind of camp ground has FEATURE TILES), a water park for the kids and a heated pool with slide.

Yep, we were roughing it big time. You know, with our mattresses and all.

So, here are ten things I learnt on our first family camping trip…

As hubby wasn’t planning to leave work until later in the afternoon, and given we were taking two cars (on account of the mattresses), I left with the kids around lunch time. My plan was that they would nap for the duration of the trip and then play in the camp playground while we waited for him and the other families to arrive.

I made sure everyone was fed and toileted, and loaded them into the car around midday. My plan was pure genius and I envisaged approximately 1.5 hours of silence while I drove the Ford Mondeo Ambient (which we still had on loan… and had facilitated our ability to take four mattresses away with us by allowing us a second car) up the highway.

All was going well, children were drifting off, music was playing, coffee was plentiful. Life was good.

Then a tire blew out! Our poor Mondeo had driven oven what turned out to be an enormous and rather sharp set of pliers on the road and punctured a tire. Rather spectacularly I might add.

I have never blown a tire before, and doing so at 120km an hour is actually rather terrifying! It makes a dreadful sound and the whole care shakes. At that moment I was rather grateful for the Mondeo’s 5 Star safety rating, and in particular the GPS which dials emergency services for you in case of a crash (given I had visions of us flying off the road and into a tree).

Thankfully, the Mondeo handled things well, even one tire down, and I was able to pull to the side of the road and park semi safely on a strip right before the Mooney Mooney Bridge.

Unfortunately, it was at this point that my genius plans unravelled. 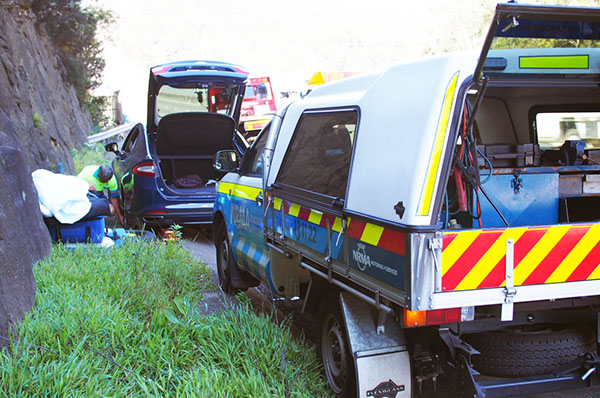 As I mentioned, blowing a tire at speed isn’t a quiet and peaceful experience, and it certainly isn’t one that children sleep through. So now I had two rather rattled children, who’d just been woken way too soon from a much needed nap, and I was stranded on the highway. Fabulous!

I rang Ford’s emergency assist line and they promptly sent out an NRMA vehicle to rescue me. What I hadn’t accounted for though was food.

As I had planned my trip immediately following lunch. and I had intended for the kids to sleep, I hadn’t packed additional food. I had water (go me), and an apple (intended for me), but that was it.

Two cranky children who have been abruptly woken from their naps want food, and they want it NOW. Cue whingeing and whining for the next 1.5 hours while we wait for the NRMA guy, unload the entire boot to access the spare wheel, change said spare wheel, reload the boot and drive to the nearest McDonalds (yep, quality parenting 101).

Moral of the story. Always pack snacks. LOTS of snacks. 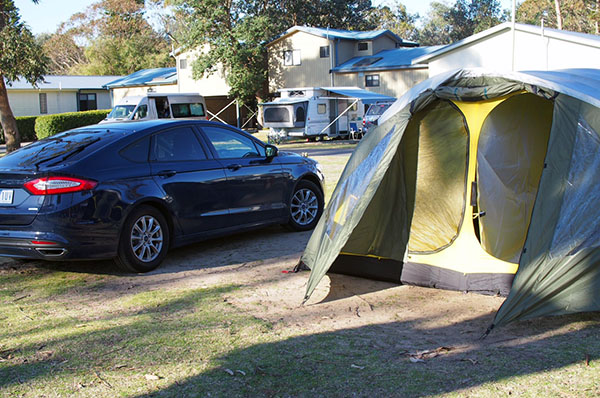 We made it! All set up with the Ford Mondeo

It has been a very long time since I’ve showered in a public bathroom, and while this one was pretty swish (with it’s fancy feature tiles and hot showers at no cost), you still don’t want to be standing on the floor in bare feet. Bring thongs!

I’ve previously sung the praises of baby wipes as a use for everything around the home. The same goes for camping. Even if you don’t have a baby, pack baby wipes. You’ll thank me later.

Things will need washing even if you are only away a few days. Make sure you bring a mini pack of laundry detergent with you.

My kids are currently quite late risers (don’t hate me, they were shocking sleepers for the first 2 years). I have grown accustomed to being able to stay up quite late at night, and know I will still get enough sleep as the kids won’t be up at the crack of dawn.

Tents do not come equipped with block out blinds, and children rise early. REALLY early. Go to bed early, you will not be sleeping in. 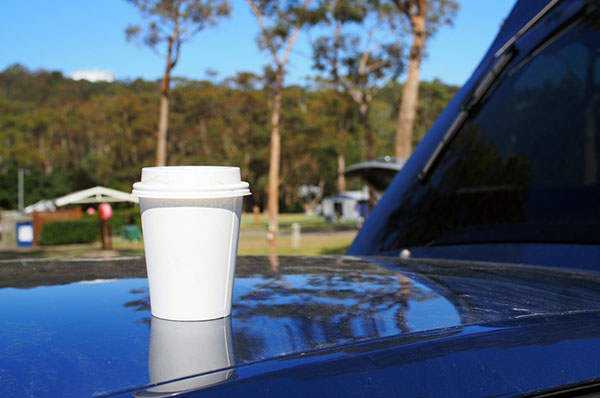 You won’t be sleeping in… coffee will be required.

Everything gets wet and or dirty while camping. Pack lots of zip lock bags and pack things into them. The same goes for anything going into an Esky with ice. You don’t want to end up with your lunch meats in a puddle of melted ice.

Lesson Seven: Bring scissors, a dustpan and broom, plus lots of plastic bags

You’ll need them. Just trust me. 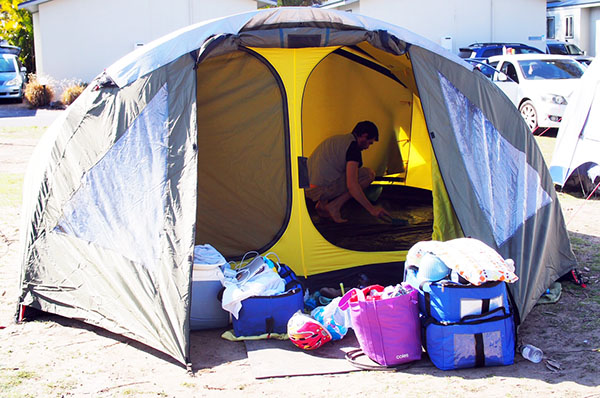 It isn’t fun cooking in the dark (even if you have a powered site and lights). Prepare everything you can early in the day and do as little cooking after dark as possible.

Lesson Nine: Packing up takes twice as long as setting up

I can’t tell you why, but nothing fits back into a bag or car the same way it did before you pulled it all out. Prepare for pack up to take much longer than set up. There isn’t really any motivation to get it finished quickly when you know you are finishing a holiday rather than starting one.

Don’t leave it to the last-minute and try to keep things tidy and organised as much as you can during your stay so you don’t have a huge mess to deal with on your final day. 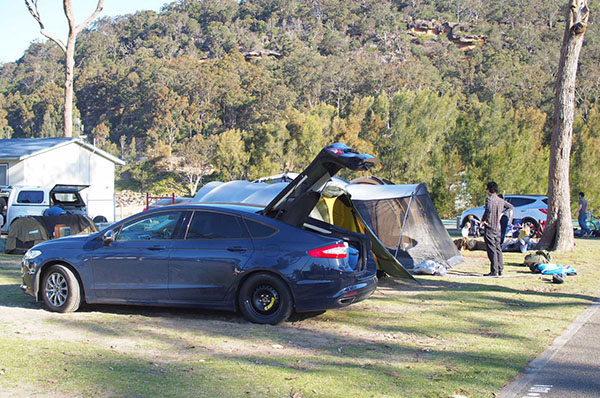 Nothing ever fits back the way it was.

Ok, so I may have given my husband a hard time about the mattresses, but in all honestly, they were awesome! He packed Mr 4’s mattress and the spare bed mattress for us, the fold out bed mattress for Mr 4 and brought along our Mr 2’s cot mattress for him. I have never slept so well camping in my life.

If you have a trailer (or a spare car thanks to a kind motor company like Ford loaning you one 😉 ), take mattresses! 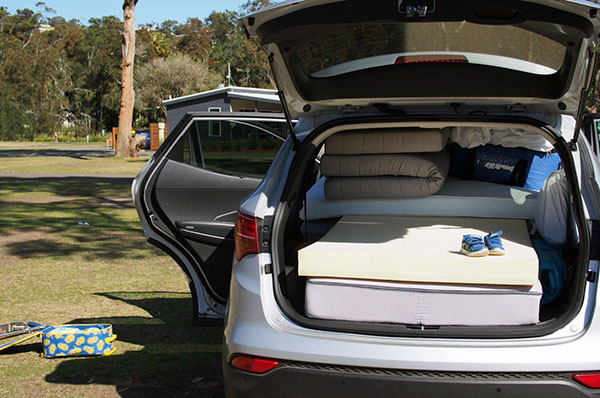 Everyone brings an entire car full of mattresses camping right?

So, have you camped with kids? Any hints?

Thanks again to Ford for the loan of a Mondeo Ambient for the past 6 weeks!

Our Blue Batmobile goes back home this week, but I hope you’ve enjoyed our journey. You can read my other posts featuring the bat mobile here: